The last decade has shown an extremely fast rise in the development of rechargeable batteries for electrification on transportation. Expectations are high, as countries world-wide tend to abandon cars with internal combustion engine. Lithium ion batteries dominate the market, yet the growing mass market also leads to concerns regarding the sustainable development of this huge field of (electro-)chemical technology.
In this keynote, the current technological status of lithium ion batteries will be briefly reviewed, and existing chemical challenges on the way to further improvements are highlighted. Research on alternative “cell chemistries”, i.e. cell concepts, is presented by own examples, and current research trends (e.g. solid-state batteries, sodium ion batteries) are analyzed with respect to their potential as future storage concepts.
Finally, techno-economic considerations (e.g. resources, materials supply, CO2 footprint) need to be considered as important boundary conditions and constraints for the success of electrochemical energy storage.

Tue. September 20 | 11.30 am – Sustainable Batteries – The Rise of Electrochemical Energy Storage and its Perspectives

The presentation describe two projects. Findings on heterogeneous catalysts based on the concept of precapture and hydrogenation of CO2 into methanol will be presented in addition to studies of the chemisorption of CO2 on the archetypical zeolite NaA.

Niklas Hedin, PhD from the Royal Institute of Technology, Stockholm, Sweden. Postdoctoral research with Bradley Chmelka in UC California at Santa Barbara, and with Sebastian Reyes at ExxonMobil Corporate Research Laboratory, Annadale, US. Now Professor of Materials Chemistry and the Chair of the Department of Materials and Environmental Chemistry at Stockholm University, Sweden.

Abstract: Unsustainable resources consumption and linear production models are causing severe impacts on the environment. New innovative ways to produce the same products with lower environmental, climate and health impacts, and circular use of recycled or renewable sourced raw material, are the key components of enhanced sustainability in the downstream chemicals industry and required to make the transition towards a sustainable and a circular economy. Besides a common societal awareness, significant upscaling in the current use of circular and sustainable feedstock is therefore needed. This will enable OMV together with Borealis to provide a holistic sustainable and circular economy for various segments.

Dr. Stefan Pirker has been Head of Technology and Innovation Management Chemical Recycling/Plastic to Oil at OMV in Schwechat since October 2019. He has been successfully managing R&D and innovation in international Austrian industrial companies for over 25 years. Before joining OMV, he held various management positions as head of R&D units, operations and business development at RHI AG and Treibacher Industrie AG. He studied chemistry at the Technical University of Vienna and received his doctorate there in 1993.
__________________

Thu. September 22 | 10.30am – The next generation in building a sustainable and circular economy industry

“C2PAT”is a joint CCU project of Lafarge, Verbund, OMV, and Borealis to create a blueprint for the decarbonization of hard-to-abate industries and will help to reduce fossil-feedstock dependency.
While we are starting with a comparatively small exploration plant in Austria, the project intends to set the trend for the industry transformation.
Circularity and our ability to utilize waste streams like organic waste, used plastics, and CO2as feedstock instead of virgin raw materials are key for a climate neutral society and an opportunity to reduce fossil feedstockby “keeping carbon in the cycle”!
C2PAT aims to demonstrate a novel, first-of-its-kind cross-sectoral carbon value circle at industrial scale. Industrial CO2released during cement production is captured (10,000 tons/y for demo plant) and transformed with green hydrogen into feedstock for a variety of renewable based chemicals and value-add plastics products of top quality and footprint performance.
The overall system is based on the integration and joint operation of different technologies that will be combined into one novel holistic value chain. A facility cluster comprising a carbon capture unit, a water electrolysis to produce green hydrogen, a new synthesis route via Reverse Water-Gas Shift Reaction and Fischer Tropsch Synthesis located at the site of Lafarge’s cement plant in Mannersdorf. Intermediates will be processed at OMV/Borealis sites into olefins and ultimately renewable based value-add plastics.
By demonstrating the feasibility, C2PAT will elaborate innovative operational and business models to develop a scale-up concept for the carbon value circle. The key innovation is using CO2emission from cement production as feedstock for petrochemicals -an integrated and cross-sectoral approach that has never been demonstrated before.
C2PAT also demonstrates a circular economy approach in the cement and chemical sector given that renewable based plastics can be reused and recycled in various recycling streams. C2PAT will explore the market potential for renewable based products, developmodels for control as well as for holistically optimizing the overall value circle.
New know-how will be gathered to transfer the demo plant to the next scaling step: A full-scale plant which can convert almost 700,000 tons of CO2/y into renewable basedproducts. Taking the next steps towards a climate neutral economy will require the right financial as well as favorable regulatory framework conditions at the EU and Austrian national level.
With this ambitious collaboration, Lafarge, OMV, VERBUND and Borealis are showcasing an innovative and viable solution for the transformation towards a carbon neutral economy in Europe.
The joint project is designed in 3 phases: In phase 1, based on a co-signed MoU the partners are evaluating and developing a joint strategy for project development and funding opportunities, business modelling and process engineering. Based on the results of phase 1, a cluster of industrial pilot plants in the Eastern part of Austria could be technically developed and realized until 2023/25 in phase 2. Phase 3 entails the full realization of the presented vision by scaling up to the full size of almost 700,000 tons of CO2/y to be captured will demonstrate the global scalability of the project. 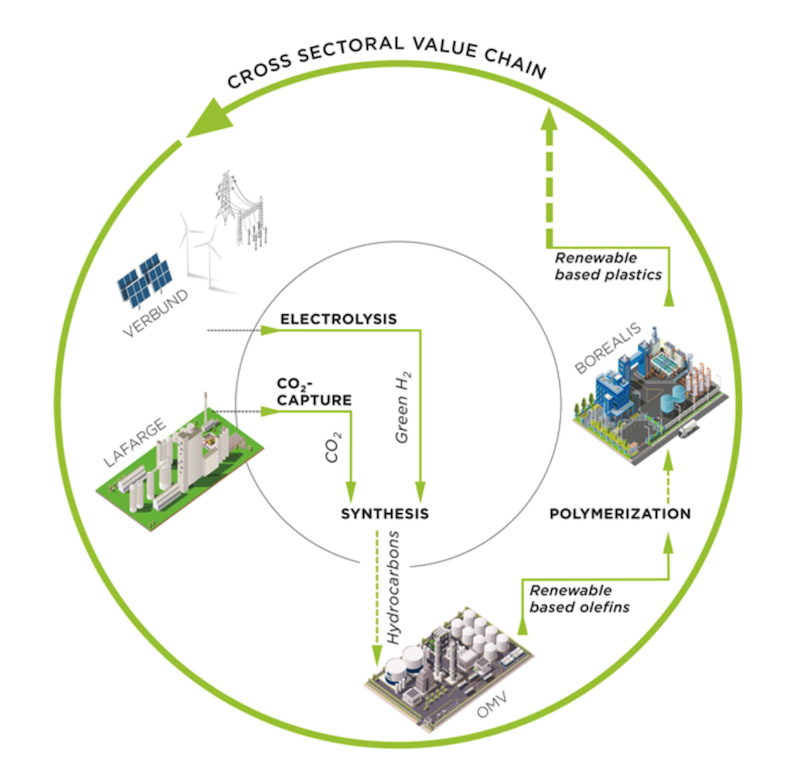 New technologies to reduce climate change are urgently needed and pose enormous challenges to the catalytic process industry. The dimension of the task makes complementary approaches necessary in order to significantly reduce emissions of greenhouse gases worldwide.
Electricity-based fuels and chemicals will make an important contribution – catalytic solutions exist, but need to be optimized and scaled up.
Upcoming regulatory framework conditions are an important driver for their implementation.
As an independent manufacturer of catalytic materials, Clariant plays a central role due to its many years of expertise in the areas of synthesis gas and refinery processes, in cooperation with various technology partners.
The presentation provides an overview of solutions to support the upcoming worldwide market to trade renewable hydrogen, supported by Clariant’s capabilities in the Power to X and Waste to X technology space.